It’s hard to know whether the extra-long speaker’s runway at Transform 2016 was designed to get moderator John Hockenberry closer to the audience or was simply a prop for a few good one-liners. Or maybe it was there to give Hockenberry a few extra seconds to consider whether he really wanted to do the thing he had planned to cap off his opening comments.

Whatever the runway’s purpose, Hockenberry used it to full effect in his opening comments at Transform 2016, which kicked off Wednesday, Sept. 14, at Mayo Civic Center in Rochester.

Hockenberry, a journalist and commentator who has been the moderator at Transform since 2011, says the conference is “about listening and learning … shedding what we think we know and introducing new practices.” It’s also, he says, “a conference about changing the conversation about health” and about “the migration of the health from the laboratory to everyday life.”

While that may sound lofty, he notes that along with the visionary, Transform is about the practical. “You take stuff home that you can do tomorrow,” he says. Tony Enquist, administrator of Charter House, Mayo Clinic's senior living facility in Rochester, was there for all of the above.

Enquist, like Hockenberry, is a fixture at Transform. He’s been there since the beginning. And his enthusiasm doesn’t seem to have dampened. “I don’t think I’ve missed one,” he says. The first year he attended, it was his interactions with the Mayo Clinic Center for Innovation, which sponsors Transform, that inspired him to attend. That and the speakers. “It was just this unique opportunity,” he says, to have a conference of that quality in his backyard. “The speakers have always been really great. They’ve never disappointed me.”

He appreciates the fact that the conference draws speakers and others from health care organizations and outside of health care to share their experiences. “It gives you a chance to think about something different than our day-to-day,” Enquist says. 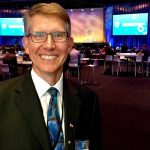 Change and managing change have been big takeaways for him, he says. As has creating change in his organization.

“We are in a constant state of change,” Enquist says. “How do I use some of the principles that they have to help my team? Some of the changes we didn’t necessarily choose, so how do you go forward and work with your team to understand how you can implement some of those in a very productive and satisfying way?”

Enquist has also drawn inspiration from the the Center for Innovation’s motto: “Think big, start small, move fast,” he says. “That has been something I’ve tried to incorporate. You can get lost in analysis paralysis. But think big, and look at those incremental steps.”

Among the speakers that have impressed him, Enquist points to moderator Hockenberry and the way “he frames what you’ve just heard.” Other highlights, he says, are the many Mayo speakers featured at Transform, who he says often are doing things he hadn’t even heard about. And he continues to learn from the mix of people from other industries sharing their challenges and how they’ve approached them.

“Learning about how they’ve implemented some of their innovative practices, hearing what happens outside of Mayo, is encouraging,” he says. “So I’ll keep coming back.”

Each year at Transform, Hockenberry plans a couple of things that are out of the ordinary for him, he says, “as a metaphor to say change is possible.” And to say, “Why not do it today?”

This year, one of those was to bring along some sheet music, and spend time playing the piano in the Gonda Building. He seemed a little relieved (and slightly amused) that his “audience” gave a better review of his playing than he did, with several thanking him for his playing.

Something else happened as he played. “Eventually, everything vanished but this community of people walking back and forth,” he says. He describes a mix of caregivers and staff, serious, sad and hopeful ... “a community of health.”

Hockenberry relates that experience to what he’s experienced recently with family members in hospice care, which he described as a community built around more than health — built around living, and a new way of looking at dying.

By contrast, he says, “The community of health is centered around this big, traditional institution.” And then he asked, instead of being centered around facilities and technology, “what if we could create communities of health?”

Then he broke into song, adapting a tune from the musical Hamilton, with a message to the audience that “history has its eyes on you.