Posted at 11:44h in Experience, Innovation, Insights by Center for Innovation 0 Comments
Share

It was a fascinating wide ranging discussion covering the definition of population health, the mechanisms and strategies of population health management (including the overriding importance of data collection/analysis and practicing medicine/providing healthcare in teams), the value of universal medical coverage (despite ACA still too many uncovered), issues around security and privacy of data and the lack of health information technology standards and EHR interoperability (need for a patient identifier), patient empowerment and access to records and relevant health data to enable better self care, issues regarding the social determinants of health and examples of strategy/success stories, incentives and tools for value based care and optimal outcomes, the challenges of behavioral/ lifestyle change, health literacy and patient engagement, the importance of context to better treat patients and obtain improved outcomes, the role of community in population health and the utterly unsustainable level of cost of healthcare in the U.S., among other topics.

Population health can be defined in a variety of ways, depending on which aspect of healthcare one wishes to emphasize: health outcomes of a nation or subgroups of the population, efficient and cost effective healthcare delivery, social and community care, individual and collective responsibility, provider (healthcare system, MD, other HCP) role and responsibility, role of government and public health, data collection and analysis. Please see “Defining Population Health which contains 100 superb brief answers to the question: What Is Population Health?

Population health management is considered to be one of five essential components of a healthcare system which would fulfill the Institute for Improved Health (IHI) “Triple Aim” as defined by 1) improving the patient experience of care (including quality and satisfaction), 2) improving the health of populations and 3) reducing the per capita cost of health care.

…the aggregation of patient data across multiple health information technology sources, the analysis of that data into a single, actionable patient record, AND the actions through which care providers can improve both clinical and financial outcome, which seeks to improve the health outcomes of a group by monitoring and identifying individual patients within that group. 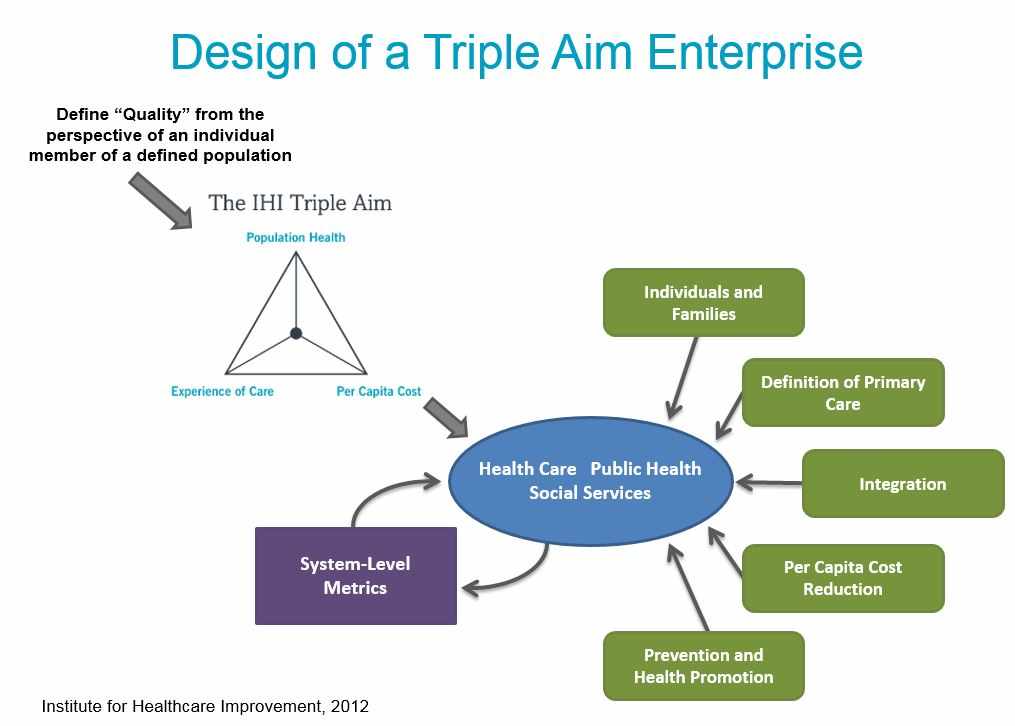 Population Health and The Social Determinants of Health

Population health (PH) broadly defined, is the health and wellness of a nation. More narrowly we use the term to describe the health and wellness of subgroups of our population (subgroups revealed through data and data analysis.) A key priority in addressing the health of a nation is to reduce health inequities or disparities among different population groups due to, among other factors, the social determinants of health, SDOH. Where one lives in the US (zip code) is predictive of health status and longevity. Poorer neighborhoods, with undue burden ofnegative social determinants of health (SDOH) have increased incidence of chronic disease and ongoing ill health.

From Wikipedia: the social determinants of health defined:

The SDOH includes all the factors: social, environmental, cultural and physical the different populations are born into, grow up and function with throughout their lifetimes which potentially have a measureable impact on health. The WHO commission on SDOH (2008) determined that worldwide the SDOH account for the major causes of health inequities and in the US, the SDOH account for 70% of avoidable mortality. In the US, 5% of the population costs 50% of health care expenditure (with the SDOH attributed to much of the poor health in this segment of the population).

In the U.S. we have not only the negative SDOH of the very poor (slammed by multiple jobs and high stress, exceedingly poor nutrition and unsafe built environments) BUT we also have the negative SDOH of being a wealthier population: (less physical energy expenditure due to less manual labor, our car culture (less walking) and more money to purchase large amounts of food). Typical lifestyle in U.S is sedentary and over-indulgent when it comes to food, resulting in obesity, Type 2 diabetes, heart disease, increased risk cancer, dementia etc. How successful population health management strategies (in U.S.) are will largely depend on success in persuading the nearly 2/3 of the population to exercise, change diet and lose weight (and we still have a smoking problem).

Who has responsibility for what regarding ultimate healthcare outcomes is tricky to answer. In one way or another, blame (or credit) will be assigned through Value Based Care re-imbursement. What responsibility for outcomes does the misguided priorities of society (short term pleasure, long term illness with support of US agriculture corporate greed)? What about when parents refuse immunization? How about poor lifestyle habits? (Are you “excused’ if you are poor ie more stress but have more culpability if wealthy?) Poor surgical outcomes: Is it patient selection or poor surgical technique/judgement or both, or none?  How to judge quality? Is the ‘all information included’ (even tiniest incidentaloma) radiology report really valuable to the referring clinician or is it TMI (too much –extraneous –information)?

Will patients and lawyers see the answer in the same light? Patients often crave all information, even the tiniest detail, but without context is all this data simply confusing? What blame should rest with health insurance companies (or hospitals) who charge rates so high that patient access to care becomes unaffordable? What culpability for physicians who don’t take Medicaid patients? What blame do elected officials have for not expanding Medicaid? Who is to blame when patients and their families do not resolve how to handle a loved ones end of life, and instead leave that conversation to be held, perversely, in the intensive care unit?

Who is to blame when public education is not adequately funded resulting in both general and health il-literacy? The questions are endless and the answer will always be: it’s complicated. But, some will be given bonuses and some have reimbursements cut. We must be very, very careful about how we assign value – and blame.

The Role of Data and Data Privacy, Security, and Openness

The acquisition of vast amounts of diverse data on patients is an essential part of population health management. It is expected that data from all medical records, medical devices, wearables, our genome, medical (and other) insurance, social media, purchasing (retail), and any publicly available or individually revealed data (likely including financial, police, real estate) will be collected in order to obtain a more complete picture/context of patients and patient populations.

Understandably patients are going to want to have some control over their data and how that data is shared through some type of consent process. Unclear, however is whether or not that will even be possible as much of the data is already in the public domain and consent may be complicated once across the board interoperability and diverse, widespread data collection is occurring. Dan Munro makes excellent arguments that a national patient identifier is a pre-requisite to getting control on both the security and privacy issues surrounding data. See his article “Who Stole Healthcare Interop?”

Ironically, at the same time vast amounts of data are being collected- healthcare professionals (MDs, NPs, PAs etc) and patients do not have access to all the data needed (due to lack of interoperability between health information technology-EHRs, wearables, or medical devices.) Please see last week’s#HCLDR conversation on Interoperability. All of us who receive or deliver care through the U.S. healthcare system experience data blocking. It is key that patients have open notes but without interoperability, this won’t be nearly adequate for successful self care.

Both Population Health and Precision Medicine are major “buzz terms” in the healthcare today. Large amounts of funding are going towards each but recently, there has been some concern that the focus (and attendant funding) on Precision Medicine (Individualized, Personal Medicine) is siphoning oxygen (attention and money) from the very important Public Health and Population Health initiatives which the U.S. healthcare system so desperately needs (see References).

Currently, different populations are being served by each initiative. Precision Medicine with its genetic and pharmaceutical emphasis is largely targeted (at this point) for cancer and rare disease patients. It is expected/hoped that a general, public health oriented aspect to precision medicine will come to pass. Population health is tasked with addressing the broad range of the chronic diseases which ail us., preventative medicine, maternal and child health, health literacy, community outreach, issues of addiction and our culture of violence, poor nutrition etc – a range of endeavors which ultimately impact each citizen in the U.S. Arguably the ultimate success of the Triple Aim and our healthcare endeavors overall will depend much more on our Population Health initiatives than on Precision Medicine at least for the foreseeable future.

Notably there is an incredibly valuable role for Precision Medicine in healthcare given that drug and other therapies are often not successful. Understanding our genetic makeup can chip away at the mystery surrounding countless sub-optimal therapies. Superb research is already coming out of this space. We just need to keep in mind that we want Precision Medicine to ultimately serve Population Health, the health of our entire population.

Finally, it’s worth remembering this memorable quote from David A. Shaywitz as we try to legislate, re-organize, engineer a better healthcare model:

…..success (in lowering healthcare costs and increasing quality of healthcare/better outcomes for patients) …will require the ability to embrace the messiness of disease and the complexity of patients, rather than providing idealized solutions that impress in the boardroom but flop in the examination.

“Heard It Through The Grapevine: The black barbershop as a source of health information”, Joyce Balls-Berry, Lea Dacy and James Balls, Hektoen International, 2015,http://www.hektoeninternational.org/index.php?option=com_content&view=article&id=1871, accessed August 7 2015

“Its Time We Talk about What Healthcare really is: Public vs Personal Health”, A Country Doctor Blog, September 23 2014,https://acountrydoctorwrites.wordpress.com/2014/09/23/its-time-we-talk-about-what-healthcare-really-is-public-versus-personal-health/, accessed August 7 2015

“Winning Across the Continuum: Partnering for Population Health in a Time of Shifting Reimbursements”, athenahealth whitepaper, February 2 2015,https://ehrintelligence.com/resources/white-papers/partnering-for-population-health-in-a-time-of-shifting-reimbursements, accessed August 7 2015