02 Sep IDEA 2015 Best in Show: A Design Strategy for Catheters and Ostomy Bags

Posted at 11:48h in Design by Center for Innovation 0 Comments
Share

Each year, the International Design Excellence Awards (IDEA) recognizes product excellence from around the world. Previous winners have included Nike, BMW, Logitech, and Tesla among other major consumer and technology brands. On August 22nd, at Benaroya Hall in Seattle, attendees of the Industrial Designers Society of America (IDSA) International Conference gathered for the “big reveal” of the IDEA 2015 Gold winners and special recognitions, including Best in Show. 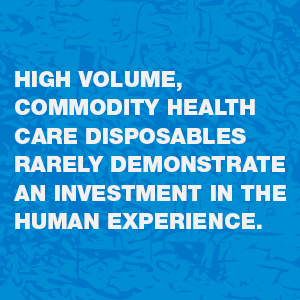 However, for those working in health care, perhaps the most significant aspect of the IDEA 2015 was the Best in Show recognition of the Coloplast Design DNA. Beating out more than 1,700 entries that included top consumer brands, this entry submitted by Native represented the use of design as a strategic mechanism for unifying Coloplast’s portfolio of catheters, ostomy bags, and other intimate healthcare products.

The field of industrial design was born out of industrialization and mass manufacturing, but the applications of discipline have continued to grow beyond the utility and beauty of artifacts. Year after year, the IDEA Gallery reflects this evolving role of design with the emergence of categories like service design, social impact design, and design strategy.

Designers are increasingly involved in the intangible aspects of business that create an environment in which innovative products and services can succeed. In a recent Harvard Business Review article, Design for Action, Tim Brown and Roger Martin referred to this as Design Intervention, saying “...with very complex artifacts, the design of their “intervention”—their introduction and integration into the status quo—is even more critical to success than the design of the artifacts themselves.”

Coloplast’s strategic use of design has also resulted in recognition by Red Dot and the iF Design Awards. Oliver Johansen, Senior Vice President in Coloplast Global R&D reflected on the role of design -

“I believe the fact that we win two awards, is a great testament to our strong Design DNA. When developing a new product we embed design from the get-go in order to make it an integrated part of the product – and not just an ad-on. This was the case with both SpeediCath Compact Eve and Sensura Mio, and will continue to be the case with future products as well.”

High volume, commodity health care disposables rarely demonstrate an investment in the human experience. While these products often represent the difference between life and death for the people who use them, they are typically utilitarian, unattractive at best and stigmatizing at worst. Cost, safety, and manufacturability are held up as the sole measures of success.

Coloplast’s investment in design strategy indicates a shift in the industry’s assumptions about how products like catheters and ostomy bags should be developed. Here, design has reached beyond the physical artifact and created an intervention at the strategic level. The result is a framework that enables dignity and respect to be consistently embodied in the form of beautiful, usable products.

Rose Anderson is a Service Designer at the Mayo Clinic Center for Innovation and served as a juror for the 2015 IDEA Awards.