Posted at 15:35h in Design, Experience by Center for Innovation 0 Comments
Share

Over the last two-and-a-half months we published a series on Stanford Social Innovation Review (SSIR) that explored what it would mean for communities to be involved in the design, implementation, and evaluation of health interventions. My co-curators and I worked hard to ensure it included the voices of different types of experts, from the technical to the local. Without wanting to choose favourites, we’re especially proud of harnessing the voices of local experts – the community members themselves. As is increasingly being said, health happens in communities so those that live within them have essential insights for us to listen to and understand – insights that are rarely heard.

The series has had a great response but our favourite is from a group of community workers who read the articles as they came out and asked themselves what they might change in their work. This is music to our ears. We wanted to create something practical, not theoretical. We tried to include clear steps on what people might do next to better involve the community in defining and creating health. We hope those community workers found new ideas and approaches that they’ll use in their work. 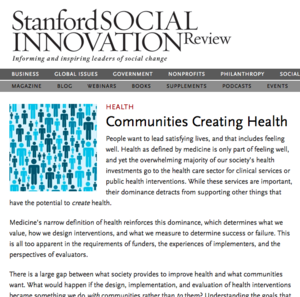 We’re looking to create an eBook of the series. While the content will always be online at SSIR, we think a book, albeit an electronic one, gives it a sense of authority, which may aid its overall message. We hope to share more news on that soon.

As the series was being published, I also began to plan the next meeting of the Creating Health Collaborative. This year we’ve expanded to twenty-two people, all trying to work out what it means to create health rather than organise around sickness (whether it be as prevention or care). TheSSIR series brought the Collaborative significant attention, which led to quite a few requests to join. I remain of the view that the Collaborative has to be about those doing rather than thinking, which influenced how I responded to the requests. I’m not sure, however, that I’m right in that view, which is why I’m going to ask this year’s members for their counsel. It’s clear that people want to get involved – and just because someone is not in a position to do doesn’t mean they don’t’ have anything to contribute.

The Collaborative’s meeting will go further than last year’s during which we incubated the idea of health beyond the lens of health care, and drafted the emerging principles. Seven people will share how their organisations are adopting a broader lens and implementing programmes outside of prevention and care to improve people’s health – however it is that their communities define ‘health’. We’ll be hearing stories of local democracy, nurturing youth leadership, and finding new business models, to name just three of the themes.

It’s immensely hard for established organisations to shift their focus from health care to health. Five people will share how their organisations are making this change, including how they made the case to internal colleagues and how they are defining new models and metrics to inform new business processes – just two of the themes from the five.

Finally, we’re aware that there is a fair amount of ‘community health’ activity out there, seemingly fuelled by the new (and confused) mantra of ‘population health’. Three people will help us understand the broader landscape, such as lessons from the world of collective impact or community wealth building, to ensure we don’t accidentally create a silo of thinking.

One of the people who’ll be sharing how their organisation is changing is Ollie Smith of Guy’s and St Thomas’ Charity, a philanthropic organisation serving the people of two boroughs of South London, Lambeth and Southwark. Since funding and attending the Collaborative’s meeting last year, he’s convinced his colleagues that they need to explore the possibilities of community-led health.

Over the next few months, I’ll be working with him to pull the evidence together and begin to outline what a health-creating programme grounded in the needs of the people and communities of Lambeth and Southwark might look like. It’s an immensely exciting opportunity and one that builds on the kind of thought leadership Ollie shared through his article in the SSIR series – specifically that long-range, place-based capital has an important catalytic role to play in finding this new approach to health.

As if all of that wasn’t enough my final ‘beginning’ to share is that my Dutch colleagues have decided to meet again to explore what health beyond health care means to them (I wrote about them in my last post). Whether it’s the Dutch Collaborative or something else, I’m hopeful it’ll catalyse a community-led voice on the future of health.

As ever, I haven’t got a clue where any of this is going. I just know that the future of health cannot just be about health care; it has to include the voices of the people – and on their terms.