03 Jul Use of Music with People with Dementia: Doing the Obvious

Posted at 11:45h in ePatient, Experience, Innovation by Center for Innovation 0 Comments
Share

So much research, and so little traction!  That is what’s been happening with strong data supporting the effective use of music with people with dementia.

There is even research that points to the characteristics that music must have to help mitigate anxiety and stress for people with dementia, as well as patients in hospitals.  And, yet, it is still considered an exception to usual and customary care.

What does it take to do the obvious?

An article in the Journal of Gerontology Nursing showed that music used during mealtimes calmed agitated elderly residents in a nursing home.  Another literature review pointed to music therapy having a cumulative impact on reducing agitation and improving the quality of life for people with dementia.

There is enough research available that to list everything would miss the point.

The larger issue is about doing what is best for people with dementia, including non-pharmaceutical interventions that are not curative.  Suffering cannot be medicated.  Agitation can be drugged, but not without further compromising the cognitive function of the person.

In healthcare, it’s not uncommon to ignore new research that challenges the current paradigm.  But, it is unfortunate.

It happened in the mid-19th century when John Snow collected data showing that cholera was water-borne, not a result of toxic fumes. And when Ignaz Semmelweis claimed that physicians who did not wash their hands following an autopsy were transmitting childbed fever. 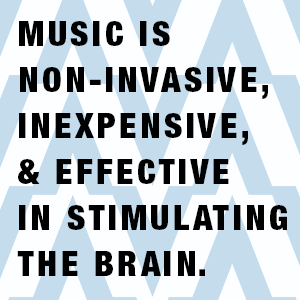 The response from the medical community was total denial and anger.  Both men were pioneers providing what we would now call evidence-based practices that have saved millions of lives.  However, in their own lifetimes, their work was rejected and their careers destroyed due to the intractable power of the existing beliefs and practices.

Today, even with a push for integrative care and the acknowledgement by the Joint Commission of the role of the mind and heart in recovery, there is still reluctance to take practices outside of the biomedical model seriously. And, yet, evidence-based practices allow room for subjective evaluation of the data, for the unique circumstances and values of those being treated, and for more than one explanation.

Music is non-invasive, inexpensive, and effective in stimulating the brain. It can reduce stress and anxiety, help create a soothing environment, decrease the negative effects of noise, and make people happy.

What more must be said?