Posted at 11:33h in Transform by Center for Innovation 0 Comments
Share

Depression. Suicide. Mental Illness. Each one of these dense words has various connotations associated with them, but one emerging theme of commonality that links them together can be summed up in one more word. Stigma. That is one of the messages a group of primarily high school seniors from Texas wanted to convey. This group of students called the Alternate Understudies was the winning team of Mayo Clinic’s Unlikely Superheroes Challenge.

They performed a short skit at Mayo Clinic’s 2014 Transform conference. They acted out a scenario where they had a friend who was in a low mood and after observing his behavior they detected he was dealing with depression. At the same time, by that student’s side was a figure who represented stigma.

The “stigma” served to infiltrate the student’s mind with negative thoughts surrounding his problem. This was represented physically when the stigma figure handed him signs that read “Nobody Cares About You,” “There Is Something Wrong With You,” “You Are Weak.” His group of friends decided to take action and be proactive about dispelling the stigmas and their negative self-perception regarding his depression.

They all underwent a transformation with each member of the group embodying a unique superhero: The Listener, Miss Positive, Professor FYI, and Poster Man. They motivated their friend and let him know that he was not alone in his struggle with depression. He was able to break out of his reverie, progress past the stigma, and ultimately chose to seek help and join the support group his friends were founding at their school.

There were two key messages this group was trying to convey. Primarily, to shed light on the fact that there are very prevalent stigmas surrounding not only depression but mental illness overall. While their messages were mainly focused on targeting high school students, these messages can be generalized to larger populations and expand the scope of raising awareness. Mental illness is a challenge to increase understanding about and to overcome because of the fact that it is an unmarked disability.

It is human nature to make assumptions and develop perceptions about people based on what we can see, based on what is marked. When something such as depression is unmarked that is when barriers are hoisted that cloud people’s understanding. From a superficial surface view all may look well but what is occurring internally may delineate a very different story.

The implications of the unmarked nature of mental illness is what gives rise to some of the associated stigmas.

One student elaborated how people may believe “that depression doesn’t exist that it is just a phase.” What the students have articulated is very true, depression is a mental illness. It is internal and there is a stigma that it can be controlled, that it can be overcome with enough willpower, through positive thinking, or removing potential stressors. It is this lack of recognition that these students wanted to highlight and it is precisely these stigmas that warrant the feelings of isolation and depreciation of self-worth as depicted by the depressed student in the video.

The stigmas can function to make individuals feel like they possess an inherent flaw and that is why they cannot overcome their issue. The fact of the matter is that depression is a medical problem. Just like a visible physical disability individuals with a mental disability need help whether that be clinical, social, or a combination of both.

This segways into the next message the students were trying to convey. The purpose behind raising awareness is to facilitate the formation of support systems and have individuals faced with depression feel comfortable and safe in confiding in their peers and seeking help. In order to develop supportive and secure social systems false notions regarding mental illness and stigmas need to be dispelled and that is what these students were trying to achieve.

The students were very creative and expressive in forming their message and relaying that to the symposium audience. The skit was simple but had effective messages embedded within with noble intentions of identifying a health problem and beginning to initiate change on the grassroots level. From students they transformed to superheroes, hopefully this transformation will serve to inspire others. Hopefully this will serve to transform thoughts, perspectives, and keep the dialogue open surrounding mental illness. 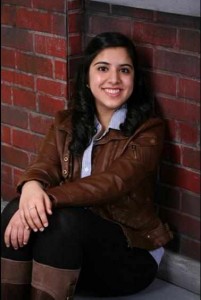 Nitya Chandiramani is currently a student at the University of Minnesota Rochester and a Writing Intern at the Center for Innovation.