Posted at 11:14h in Design, Experience by Center for Innovation 0 Comments
Share

A place exists where innovation happens better than anywhere else. Ideas come in torrents. Experiments occur almost by accident. Failures are so common that people barely pause to ponder them. Every breath brings a fresh invention, and everyone is consumed with what's next. 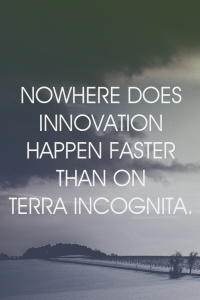 Welcome to the unknown, the one destination guaranteed to produce innovation. Scientists play here. So do entrepreneurs. So do children and college students and new employees. History is full of fascinating and frightening stories of those who found the unknown and barely survived, or didn't. Explorers are drawn to it -- Marco Polo and Christopher Columbus and Alexander von Humboldt and David Livingstone. Mapmakers from the Middle Ages gave it a name -- terra incognita, or land unknown.

They also wrote "Here Be Dragons." Sometimes the dragons did exist, as in the early days of vaccine testing or with the discovery of radiation. Other times not. Captain Cook sailed to terra incognita and found Australia. Edison went toterra incognita and found the phonograph and motion picture camera and long-lasting electric light bulb. The governments of Europe went there to fund nuclear research and discovered the Internet.

For organizations attempting to improve at innovation, a journey to terra incognitacreates that most rare experience -- the need to innovate. Stranded in a strange place, employees find themselves unable to rely on organizational commodities like a common language, expected working hours, standard processes, reliable systems, established relationships, available resources, and known responsibilities. Lacking those things, they create new commodities. They network. They absorb information with the speed and intensity of people with nothing to lose. They cast aside old reliable strategies and invent new ones. They fight dragons.

Maybe it's the fear. Maybe it's the unleashing of things long bottled up. But nowhere does innovation happen faster* than on terra incognita. Speed of learning, experimentation and problem solving unfold so quickly that no oral history could capture it. Mistakes, confusion and wasted effort are all part of the experience. So are insights, breakthroughs and the rapid assimilation of new ideas. The first colonists to North America found terra incognita. The natives were new to them. The predators, minerals, weather, plants and pests were new to them. Also new were the absence of things they took for granted -- roads, transport, communities, a commerce system and an established government.

Almost everything they did required innovation to make it happen. Plants and animals were often imported in attempts to stimulate new industries and draw more colonists. Vines from around Europe were planted to see how winemaking might prosper. Hemp was cultivated; silkworms were tried. Success with sugar beets and tobacco eventually transformed hand-to-mouth survival into an economy with the resources for a wide range of innovations. But the price of learning was high. The only thing to match their rate of innovation was their rate of mortality. 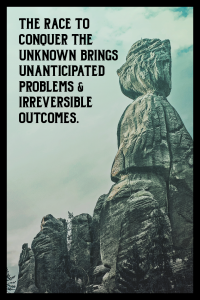 Not surprisingly, terra incognita is a dangerous place. Ideas die there. Inventions die there. Businesses too. Even people, as when they explore new lands, or test new technologies, or try new social concepts. The race to conquer the unknown brings unanticipated problems and irreversible outcomes. For organizations wanting to improve at innovation, the natural response is to minimize the dangers of terra incognita without sacrificing the speed to exploit it.

One method is piecemeal learning. Rookie taxi drivers, or tourists, or robots designed to explore other planets build mental maps of their new world through short trips, learning on the job, and improving performance as they go. The tradeoff, though, is efficiency -- lots of wasted trips.

Another method is to strengthen our ability to adapt and react to the unexpected. Classes that teach employees how to improvise (Improv) help. Initiating open innovation discussions with complementary companies can force new thinking. Virtual worlds like Second Life are powerful tools for improving speed of employee adaptation. Simulation centers, whether for pilots or physicians or auto engineers, offer realistic ways to experiment and learn in a safe environment. Also suitable for remembering how to explore the unknown are video games, where employees can take on new identities and craft new innovation skills -- and be free to take risks and make mistakes because no one is harmed.

The "spinoff" is another method. Recognizing that corporate diversity often suppresses a new business from focusing and flourishing, organizations spin it off to find its own future. In the process of adapting to a new world, the spinoff allows many old things pass away -- rules, titles, methods, culture, even the very processes that led to the spinoff itself. After a while, reintegration with the parent organization is almost impossible. The spinoff has evolved into something new.

For most organizations, cultivating a staff that's comfortable with the unknown may be a luxury because those skills are used only rarely. At the same time, fortunes are made or lost by recognizing when terra incognita appears and then having the employees ready to respond to its opportunities. New knowledge and new worlds are rapidly emerging all around us. Sure there be dragons. But aren't they worth fighting?

* The best evidence for demonstrating how quickly innovation happens in the unknown comes, ironically, from the earth's fossil record. Following a detailed study of species growth after extinction events -- a birthplace for terra incognita's -- the paleontologists Gould and Eldridge (1971) were stunned to find that surviving organisms adapted rapidly to newly opened niches in the ecosystem. Instead of gradual evolution, plants and animals and microorganisms burst breathlessly out of the starting gate, evolved at breakneck speed, and slowed only when they successfully exploited a promising niche (or everything necessary for life and reproduction). Gould and Eldridge called this process "punctuated equilibrium," meaning long periods of evolutionary stasis (little or no change) interrupted now and again by rapid spurts of evolution -- spurts always traceable to a newly opened world. Human history shows the same rapid spurts around every new technology (e.g., plastic, the transistor, the internal combustion engine), social change (group hunting, agriculture, civil rights), and medical advance (germ theory, imaging, the genome).