18 Mar The Process of Transformation Begins With One Person: You

Posted at 13:22h in Insights, Transform by Center for Innovation 0 Comments
Share

“You have been diagnosed with (insert disease).” Those six simple words that physicians so easily declare can transform an individual from a powerful person to a powerless patient. That was the experience encountered by social scientist and Intel Fellow, Eric Dishman. In Mayo Clinic’s 2014 Transform Symposium Eric eloquently articulated the challenges with our current healthcare system and subsequently the obstacles that patients are faced with as a result.

The transition from a healthy person to a patient with an overwhelming, and frankly in some cases terrifying, diagnosis is a formidable one, it has the effect of leaving patients in a vulnerable state. The beacon of hope they believe they might have lies in the hands of the healthcare professionals whom they look to for guidance through their medical hardships. 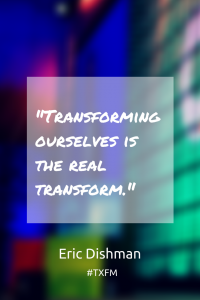 Investing their complete trust into these professionals, who do have honorable intentions, can be a slippery slope down a difficult path rendering patients prisoners of their diagnoses. While diagnostic labels alert patients of their problems, the caveat is how these labels serve to consume patients’ former lives. Initially, Eric underwent all of these phases from being transformed to a passive patient, after the news of his kidney cancer diagnosis, to having his disease and treatment engulf his life.

What makes Eric’s story unique is that through after overcoming the initial shock he was, as he described himself, a proactive patient. Throughout his presentation he outlined the series of steps he had taken to be an advocate for himself and remain actively engaged in his treatment process. He began with identifying data patterns from his sport brain and presenting that information to physical therapists in an effort to garner customized treatment to manage and relieve his pain.

Despite the obstacles he faced from healthcare professionals concerned with liability suits to lack of familiarity with the sport brain data, he persevered. He eventually found a physical therapist willing to work with him and generate a patient-focused care plan. He learned to advocate for his goals and passions to ensure they were considered and incorporated during the course of his treatment. For example, he firmly insisted to his physicians that he should be allowed to have lower doses of chemotherapy over an extended period of time. He wanted to be able to have his treatment from the comfort of his home, in order to enable him to continue his passion for winter sports.

While patient pro-activity is certainly a salient component of effective patient care and treatment, the other half of the equation includes the cooperation of the healthcare system in collaborating with patients. Complying with patients to empower them and make them the “captains” of their medical ships is an integral component for successful patient-professional relationships and healthcare progress.

Professionals, and the modern healthcare system in general, need to deviate from the lens of viewing patients by their labelled diagnosis and apply a more holistic approach that incorporates patient goals and keeps a channel of dialogue open. As Eric elaborated, treatments need to be customized and patients need to be heard. There should be more willingness to experiment and integrate patient data and devices, and not be confined to the shelter of the status quo at all times.

In Eric’s case, after working with his genome sequence the physicians discovered that they had been treating him with the wrong medications and treatments through the course of his cancer. The problems were rectified and Eric was eventually cleared for a kidney transplant and has thus been cancer free. As Eric pointed out, his case was an anomaly and not every patient receives a happy ending.

Part of this process is educating patients and providing them with the opportunity to be proactive and masters of their healthcare destiny. To avoid having them conform to the stigmas and expectations of their diagnosis or be constrained by the limiting parameters constructed for them. Eric acknowledges that as a result of his education, technology savviness, access to policy and various other privileges was he able to be an active participant and maneuver though the healthcare system. People from differing socioeconomic, racial, and cultural backgrounds most likely do not have the same knowledge and privileges.

Eric advocates “part of quality metrics being does it include patient goals and preferences and we need to teach patients to even articulate what their goals and preferences are.” The facilities and technologies are available and ready to be used on behalf of both patients and professionals, each group has to undergo their respective transformations in order to build a better healthcare system that encompasses the needs of everyone under its umbrella.

The essence of Eric’s message was captured in his quote: “Transforming ourselves is the real transform,” and that process begins with one person. You. 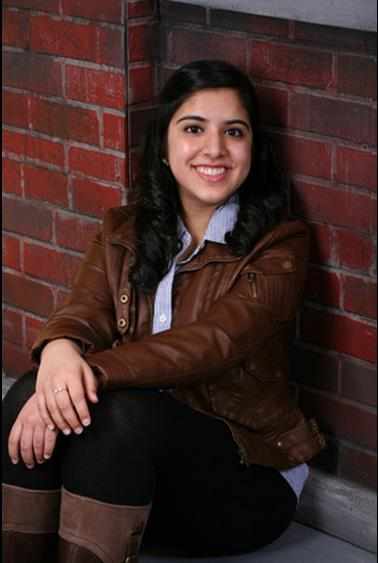 Nitya Chandiramani is a student at the University of Minnesota Rochester, and an Writing Intern at the Center for Innovation at Mayo Clinic.