Posted at 11:44h in Innovation, Insights by Center for Innovation 0 Comments
Share

The Irish Elk was the largest deer that ever lived. It's antlers were massive, spanning twelve feet across. But it thrived for only a short time -- maybe four hundred thousand years (400,000 B.C - 8,000 B.C.), through periods of repeated glaciation. With few predators and abundant territory, the elk grew enormously over the centuries, almost seven feet high at the shoulder. Then the environment changed for good. Resources disappeared. And the elk vanished, leaving only fossils and questions around why it failed to adapt and survive.

Extinction is not rare. Quite the opposite. More than 99.9% of organisms that have lived are now extinct. Species live and die, just like organizations. Remember Enron? General Foods, Pan Am, Compaq, TRW? Approximately 87% of the Fortune 500 companies from 1955 are gone today. Only by digging can you find the fossils of these firms, despite their once-incredible market dominance.

Companies fight off the potential for extinction everyday, just as species do. New predators emerge. Habitats decrease in size. Inbreeding undermines resilience. And catastrophes occur suddenly with devastating effect. Living as long and successfully as the Irish Elk (400 millennia) would be unimaginable for a multinational organization, with a lifespan estimated at only 40-50 years (The Living Company, 1997). Wouldn't you think we could borrow some strategies from nature to keep a terrific firm around much longer than forty years? Ancestors of the horseshoe crab, for example, can be traced back 450 million years! 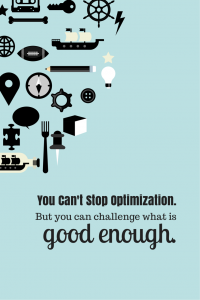 One strategy worth considering comes from the 1930s. In order to visualize how a particular species fits its current environment, the geneticist Sewell Wright developed what he called a fitness landscape. It was like a 3D topographical map with hills and valleys. Each hill was an ecosystem on which species competed (a tundra, for example, or maybe big box electronics). For a given period, being high on a hill was a good thing. It meant you dominated that particular niche (like the Irish Elk did, or Best Buy did) and outcompeted others for the same resources. Being low in a valley meant you were just getting by (with the future looking somewhat grim). New companies are in valleys, facing the perilous challenge of trying to conquer somebody's hill, or needing to discover an unexploited one. Old companies can be valleys too, wondering what went wrong.

Perhaps the most interesting thing (in regards to strategy) about fitness landscapes is that the longest-lasting organisms are not always the most successful ones. They maintain themselves just above the middle of the hill, competing well, but maybe not as well as they could. They don't maximize returns. They don't own the market. They fail to totally optimize. But somehow, when times change, they soldier on, while more superior competitors disappear. Why? Biologists seem to argue that these species divert resources away from being "the best" into preserving or adding to their diversity (without a clear strategy of immediate utility). By doing so, they create immunities that protect against unexpected changes to their particular environment.

Yet multinational companies have considerable diversity. You could make a case that the most successful ones do a great job of populating their fitness landscape hill with diversification activities from top to bottom. So why do many of these firms last only 40-50 years?

Optimization in organizations is a compulsive activity. It's very difficult to apply the best project management techniques or hiring policies or software programs to just those parts of the organization where the greatest return is generated (top of the hill). Rather, it seems obvious to apply such amazing tools (strategies, policies, methods) across the entire organization to maximize value. 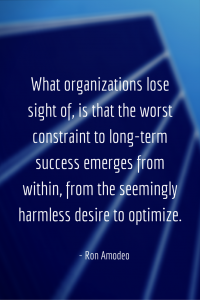 However, it is through such actions that innovations with the potential to disrupt (bottom of the hill) find themselves over encumbered by stuff too sophisticated or engineered for their needs. Inspired leaps of faith by non-experts suddenly lose faith and fall short under an expert's guidance. Messy, ragged processes that typically generate new ideas get organized and cleaned up and generate nothing new. Projects with high uncertainty are measured enough to demonstrate that they will almost certainly fail, putting quite a damper on doing anything that is risky and different. In other words, what organizations lose sight of, even when they devote reasonable resources (10%) to transformation, innovation and what's next, is that the worst constraint to long-term success emerges from within, from the seemingly harmless desire to optimize.

This insight is not new, but it is fairly underappreciated. You've heard the old phrase perfect is the enemy of good when companies have lots to do, but little time or money to make it happen? Hence, "speed" is a good countermeasure to optimization. It can eliminate unnecessary reports and meetings and complicated tools that hamper the desperate search to discover new value.

Assuming that diversification activities should play by the same rules as the rest of the activities in an organization is another downside of optimization. In India, the concept of Jugaad refers to innovations that bend or ignore the rules, an especially helpful strategy when resources are scant.

A similar notion can be extracted from the phrase satisficing, coined by the psychologist Herbert Simon in the 1950s to explain how people need to define minimal thresholds for acceptable decisions (meaning not optimal) because they lack the cognitive ability to evaluate all outcomes with "sufficient precision". So, negotiating between what diversified activities must adopt (safety standards) and what they'd prefer to avoid (hiring policies) should be well worth our attention when funding new initiatives.

Some teachings in the practice of entrepreneurship are also helping organizations pull back from the excesses of optimization. The Lean Startup (2011) shows that small, iterative changes suggested by prospective customers around an incomplete solution (or minimally-viable product) can save money, take less time, and lead to a more robust result (or earlier pivot point, or faster fail). And Beyond the Idea (2013) suggests multiple lessons in executing innovations (e.g. specialized teams and specialized plans) to give them the best chance at discovering or conquering a landscape that only they can truly envision.

You can't stop optimization. Mostly you don't want to, given all its benefits. But you can help your organization challenge itself on what is "good enough."