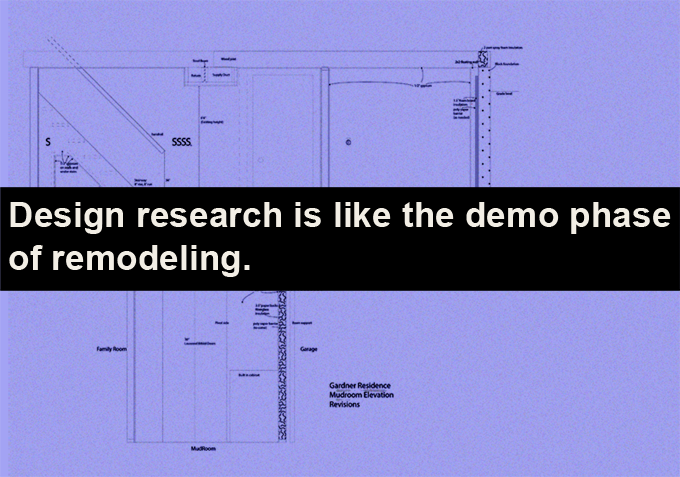 Design research is like the demo phase of remodeling. To rework a basement requires dismantling much of it—taking the drywall, or in my case, smoky wood paneling that had been painted “Fluffy biscuit” (per an old paint can label) down—so I can do the tasks that need doing: electrical work, venting and heating ducts, insulating, etc. The most recent thing to suffer the hammer and pry bar at my house was the utility room wall.

While the utility room systems worked, per se, they didn’t work as well as I would have liked, and were not up to certain standards. For example, the dryer vent system included 8 feet of flexible vinyl accordion tubing behind the wall, which is frowned on generally because it’s a fire-hazard. I knew it was there going in, and it was the reason why I tore into the wall in the first place.

As I demoed, I found other things that weren’t what one would have assumed given the relatively workable nature of everything. For example, studs were not found every 16 inches as is customary in building practice. But I learned other things too: I could see where at some point the plumbing was revised so that water running to the sink and dishwasher upstairs would be soft, while the washing machine still received hard water. I could see how the PVC drainpipe for the washing machine had been connected to the existing drain-line, which was made of galvanized steel. I could see the wiring for the disposal in the kitchen upstairs and how that had been grafted into other electrical circuits. And I could see the cinderblock wall that had been painted a vivid and nearly oppressive flat tomato-soup orange.

I started reflecting on these strata, and realized that design research is a lot like taking down that outer layer. As I get back behind that layer, I start to see how things have been working to date and I can no longer make assumptions—assumptions about how things are put together, what problems exist, how long it might take me to fix something.

Before the demolition I had a general sense for what was happening, I had a plan for how I would renovate but it took the demolition to really get an accurate picture of the work it would take. I have a better idea of the constraints. And, I have a better idea of who this house is, shaped by one hundred decisions that have been made—often times independent of other future decisions and consequences—but inextricably tied to past decisions.

After a couple months in secondary research on the topic, I am about to begin my exploratory research with people who have type 2 diabetes. The process will surely peel back that outside layer and help me really understand and empathize with a few people with the condition I hope, to learn much of what makes them who they are. Despite any grand plans that we have preconceived, we only know what and how we can build after the research—demolition of our preconceptions.