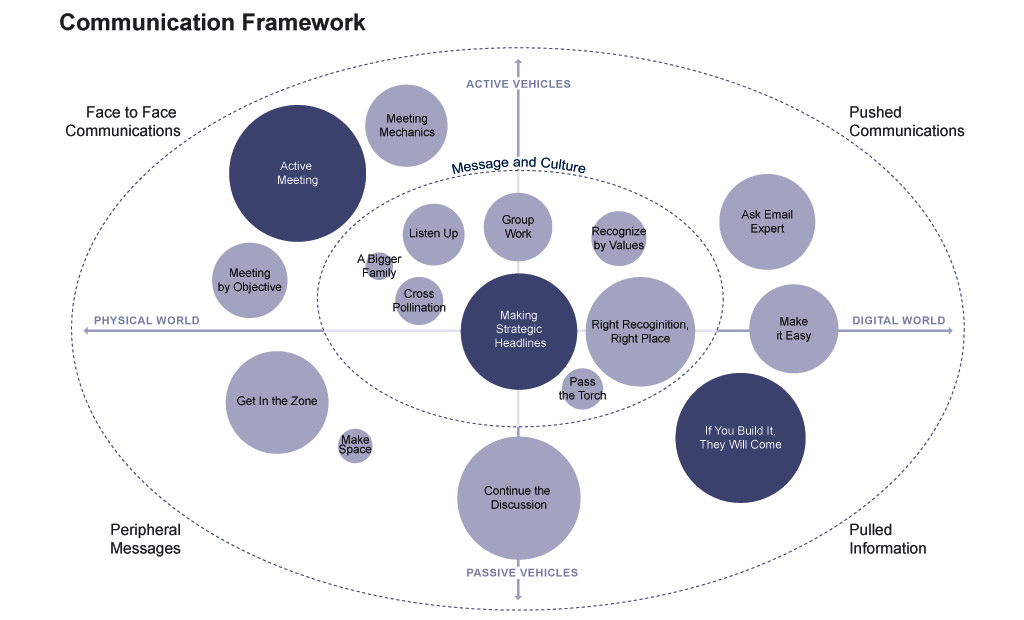 Posted at 22:03h in Insights by Rose Anderson 0 Comments
Share

“A five minute car ride helped us solve our challenge with resident duty hour restrictions.” That is what a transplant surgeon at Mayo Clinic said when we interviewed him about communication within the Department of Surgery. He told us the story of piling into a car with a group of other surgeons to carpool the short distance from Saint Mary’s Hospital to the downtown Gonda Building for a meeting. These were colleagues he knew and worked with at the Mayo Clinic Rochester campus, but they were from other divisions and it was a rare for them to have a few unstructured minutes together to discuss shared challenges.

When the Department of Surgery asked the Center for Innovation to identify new ways for surgeons to communicate with their colleagues, we began by understanding the context of the problem before we proposed concepts. We conducted interviews with surgeons from across the 10 divisions and observed the spaces in which they worked. The resulting insights took the problem as given (new communication modes) and reframed it into the problem as understood (time pressures, fragmentation, knowledge capture and strategic messaging). We discovered that it was less about adding more communications, but much more importantly about removing the barriers to effective communication.

A primary barrier is time pressure – surgeons’ schedules leave little time for them to reach out and build relationships with colleagues outside of their divisions. In the downtime they do have, significant time is spent sorting through the relevant and irrelevant messages in email inboxes rather than engaging in meaningful conversation with colleagues. The email problem is due in part to the primitive mechanisms Outlook provides for prioritizing and organizing exchanges. It is also exacerbated because email is the only mainstream digital communication option. Imagine every time you wanted to say something to someone, you had to write a letter. That is how we are using email today. A robust digital communication framework at the institutional level would alleviate the email burden by channeling short messages, questions, and knowledge sharing to more appropriate platforms: instant messaging, chat rooms, forums, and texting are currently used, but in an uncoordinated, ad hoc way by early adopters.

The barrier of time pressure also leads to the fragmentation of the surgeon community. New surgeons who join the practice have little time or incentive to build relationships with other surgical disciplines beyond their immediate surroundings or with other Mayo Clinic sites. Mid-career surgeons expressed a sense of loss for the days of a close-knit surgeon community, a loss due in part to the rapid increase of the department’s size coupled with the unintentional acceptance of email as a proxy for meaningful conversation. The informal matrix of relationships that face-to-face communication afforded in the past has been underappreciated and undervalued as a component of maintaining an integrated community of practice. Efficiency and utilization are easier to measure, but as we spoke with the surgeons, we came to understand the important role that the quality of communication and relationships play in creating a network through which knowledge can flow.

The diffusion and application of new knowledge is a challenge across the health care delivery system. The microcosm of our department of surgery is no exception. Our interviews and observations highlighted the need for a more cohesive approach to capture and apply new knowledge across the divisions. Each division uses its intranet home page in a different way, with varying degrees of success and support. An effective, integrated framework for online communication and collaboration does not yet exist. There is a declared commitment to collaboration as a core value of the practice, yet the tools available perform poorly and the resources needed have not been operationalized into a formal expectation.

To address these challenges of time pressure, fragmentation, knowledge sharing, and strategic messaging, we offered concepts for prototyping to the Department of Surgery. Ideas were generated through a series of stakeholder brainstorming sessions, and a book of 14 concept themes was developed. Concepts were organized onto a communication framework and rated on their potential to impact the identified challenges. Each concept theme proposed a set of ideas for prototyping that started with small, simple, tactical approaches that built toward a bigger vision that would require longer-term planning and a broader union of forces to create.

A year after the delivery of this concept book to the Department of Surgery, there has been prototyping activity within several of the themes, including Active Meeting. In response to the identified need for unstructured time to allow informal networks and familiarity among surgeons to grow, the first department “Un-Meeting” was held. Instead of a full agenda and lecture hall seating, the department’s 80 surgeons in Rochester gathered in a collaborative space to discuss the burning issues of the day. There was no agenda; instead they organized themselves around the topics that emerged and participated in the discussions they found the most beneficial. This first “Un-Meeting” received high reviews and a second is planned before the end of the year.

A self-identified surgeon “geek group” formed to explore the opportunities presented in technology-based themes of Build It, Make it Easy, and Ask Email Expert. Rather than start from scratch, we connected this group with other areas at Mayo Clinic that were actively working on related projects. Radiology’s Project RADAR, a 2009 CoDE internal innovation award winner, is a clinical practice-driven, online platform that responds to the real-time communication and knowledge needs of individual staff members as they coordinate the flow of patients and tasks involved in the imaging process.

Group Work, Cross Pollination, and Make Space were concept themes based on activities driven by strategic objectives and workspace environments driven by group work. While they offered simple ways to start small through prototyping, these would require institutional support for the space and time needed to build toward the vision proposed. There is a growing activity around operational support for broader collaboration through both explicit expectation and implicit permission. Special councils of cross-disciplinary and cross-site teams continue to form to support enterprise-wide efforts toward best practices and diffusion in many areas. Institutional readiness is a key factor, and as these concept themes wait in the wings, they may morph through informal networks, and may emerge, unrecognizable in unexpected places.

Designing within systems means that the correlation and resonance with proposed concepts is more observable than straightforward cause and effect. We cannot offer up proof today that these concepts will lead to better communication among surgeons. However, in Roger Martin’s words at Transform 2011, we can make the “logical leap of the mind” to arrive at the hypothesis that surgeons who work in a context that actively values and makes space for meaningful, collegial relationships will communicate more effectively and work more cohesively as an integrated community of practice.