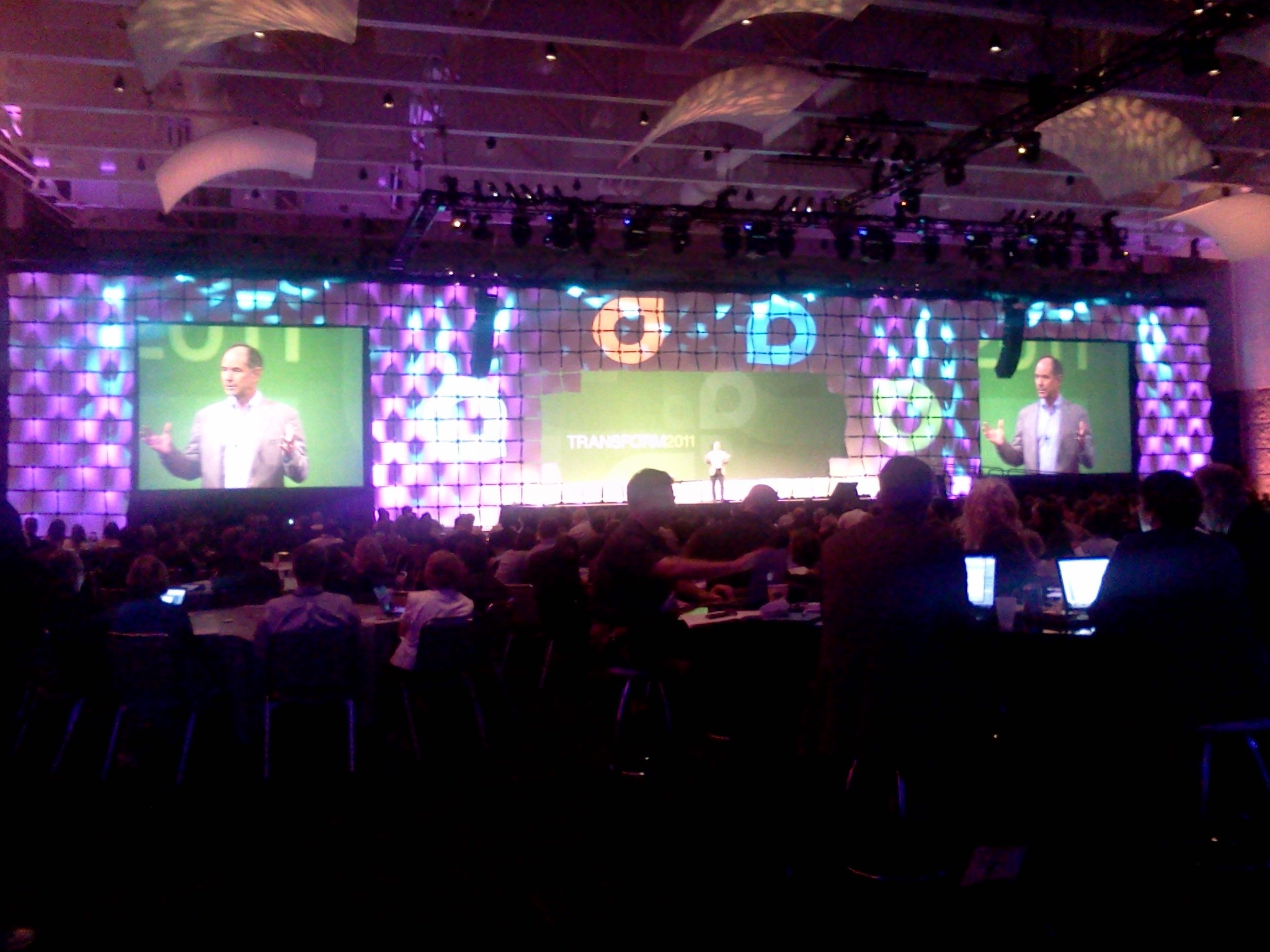 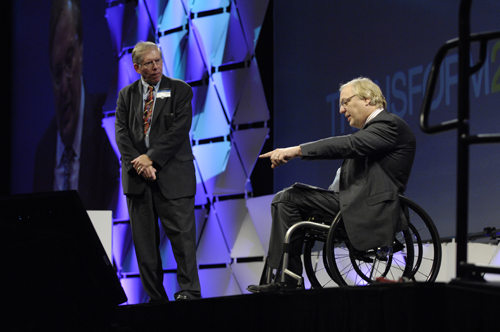 Speakers highlighting the connection between communities and health care kicked off the final day of the Transform 2011 Symposium. Most of the speaker emphasized that improved health care will not come from getting more resources, but rather from making better use of existing resources.

Communities and health care come together

Sharing an example of caring for dementia patients in North England, Thackara illustrated how people look after their health and the health of others with little to no cost by restructuring the way medial resources are provided. Concluding his speech, Thackara stressed the importance of considering the social context when thinking about the delivery of health care.

Next,  Sanjeev Arora, M.D.,  took the stage to talk about Project ECHO and what the health care industry can learn from the project, which has successfully treated Hepatitis C in underserved areas by using community resources in news ways.  For example, the group trains local clinicians in rural areas to deliver care and trains prisoners to teach other prisoners about the risks of sexually transmitted diseases.

In a study comparing the success of Hepatitis C treatment through the ECHO Project and a local university, "We concluded that rural primary care clinicians deliver Hepatitis C care that is as safe and effective as a university clinic with this ECHO model and we can improve care for minorities," said Arora. This is encouraging for the group, which plans to use the success in treating Hepatitis C as a model for treating other diseases.

As a dean for education and global initiatives at the University of Michigan, Joseph Kolars, M.D. explained the importance of making medical training relevant to the community the worker will serve.

He also introduced the idea that many of the United State's health care solutions may come from developing countries where traditional medicine gets challenges. For example, in Africa Dr. Kolars and his colleagues discovered low-cost simulation solutions and built curriculum based on patients' needs. These discoveries and skills can help make health care more affordable and effective in developing countries as well.

Prior to the last speaker, John Crowley  presented his iSpot piece, which highlighted FoodOasis, a unique program that changes the relationship between farmers and consumers to bring affordable produce to more people. See video below.

Michael Murphy, an architect and the final presenter, shared the journey of designing a hospital in Butaro, Rwanda. Through design, Murphy's firm found ways to prevent the spread of disease. For example, instead of building hallways where patients gathered and disease easily spread, Murphy and his team built a hospital with no hallways and found ways to improve ventilation within the hospital to reduce the spread of disease.

First, ePatient Dave (Dave deBronkart) took center stage. The activist and advocate used his own experience to illustrate the power of learning from others and their health care stories. Diagnosed with stage IV kidney cancer, which has a median survival of just 24 weeks, deBronkart faced a grim reality and set out to find out if there options other than what he was offered -- options that offered hope. He eventually learned from others with similar cancers that his best hope was a treatment that eludes most patients. "The most clinically relevant information is something that three of four patients with this condition don't even hear about."

deBronkart credits his survival to something he calls "participatory medicine." It's not a "new and improbable" thing, he said. "It's been going on for ages." Participatory medicine brings the patient into the care experience.  "Patients can connect and bring new value to the health care transaction," he said. "Physicians have many things to track down. I had only one thing I was interested in."

He used e-patient.net and Cure Together as examples of "patient sourcing" -- groups of patients coming together to help themselves, help each other and bring their ideas to health care. "Let patients help," he said. 'We might surprise you."

Dawn Owens of Optum Health took the stage next asking, "What does it take to get millions of people to become ePatients?" Her talk focused on health care consumerism and finding ways to become invested in their own health and health care. She and her colleagues asked if there is a better way to support patients as they navigate through health care services and improve their satisfaction. .\

She discussed the GOh! Initiative, which got 75 percent of its audience to (do something)

To achieve similar success, Owens said, we must make health care system easier to navigate; make health care providers a trusted source; make it local -- bringing in the local health care community; make it personal, with a focus on my needs each patient's needs and with highly personalized programs; and bring it to the individual rather than making them take extra steps.

Gianna Marzilli Ericson from Continuum took the stage with a bit of a counterpoint. Previous sessions had indicated that the patient is health care's newest superhero, they said. But, the consumer design approach would take a different view. And the pressures facing those seeking care -- and their loved ones -- make that an unrealistic expectation.

"Patients are expected to be empowered, advocate for themselves and loved ones, and expected to understand their conditions," they said. But patients are sick. They're stressed. Their dealing with financial challenges. They're fighting with their insurers. And then they're asked to become experts in their conditions, and make sense of clinical report cards and outcomes research. "We don't think that treating patients as consumers is really helpful, " they said.

"If we want to improve health care experience, we need to decide what patients really need in the health care experience." Acknowledge that there's a major engagement gap - normal people don't think about health all day. There is an opportunity is to link into what's really important for folks We need to design for the patient who really is not engaged in their health. Need to design to truly understand our patients' values. Get over this notion of the ideal. Be realistic about results.  Need to redefine what we mean by being patient-centric.

Andrew Zolli was on tap to talk about the future. The futures researcher and curator of PopTech talked about future trends in society, patterns he's observed, social media and human behavior. (Using growth patterns as predictors, he proposed that by 2050, one out of every three people on earth will be Elvis impersonators!) On a more serious note, he discussed trends in health care and risk, and why fast-moving trends get all the attention while slower moving trends have all the power. (Our brains are good at dealing with fast moving personified risks and very bad at slower moving risks)

Zolli also discussed the idea that when we build things to prevent risk (such as bicycle helmets) people become bigger risk-takers, because they feel more protected. "Human behavior is funny!" he said.

On the other side of behavior change, Zollie talked about how games can drive behavioral change. He discussed an app in development called Temptd. "Imagine crowd-sourcing a decision you have to make among your friends and followers," he said. For example, "Say, you want to eat a Crispy Cream doughnut." You take a picture of the doughnut, send it to your friends, and they immediately begin to talking you out of it. And they get points if you don't eat it. "It's a reward structure that makes people behave a certain predictable way," he said. The beta version of this game is proving to be great fun, he said. They just might be onto something.

Maggie Breslin, a senior designer/researcher in the Mayo Clinic Center for Innovation, was up next. Breslin started with a discussion of a tweet from Transform 2010 that went "viral" last year. It bugged her. A lot. So she began to investigate. The was about architecture in health care spaces and based on a presenter's statement and said, "Receiving healthcare is the third leading cause of death in the US." The source of the tweet, it turns out, was a journal article that didn't actually contain or necessarily support the rather provocative statement.

Breslin challenged those in attendance to capture information in full context -- in stories, not as data points -- "for it is only in capturing the whole story" that we can "effect why and how certain things happen." As an example, she asked how we can "take the knowledge that's generated through medical research" and translate it for patients in a way that helps them "decide what they want to do in health care."

In closing, Breslin used her story as a call to action in with questions of how to design a system of health care. "We can all be catalysts when something bugs us and we dig a little deeper."

The Wrap Up
Tying things up at the end was host John Hockenberry, who took the assembled transformers back through the conference, hitting on three main themes:

Hockenberry then discussed the media portrayal and public perception of health care, from Marcus Welby, M.D., to Medical Center to ER to House. "That's drama. That's Hollywood," he said. The challenge, he said, is this: "If consumers and patients and people are going to be more rationally concerned about their health, somehow we have to jettison these delusional Hollywood notions of medicine ... and come up with that show called Health."

That show, Hockenbery said, is "going to be about patient compliance, the drama of improving health care broadly in America, the drama of making the money we spend for health care meet the expectations we have for defining our own normal.

"If we could make that show," he said, "That's a great story. And we can all retire."