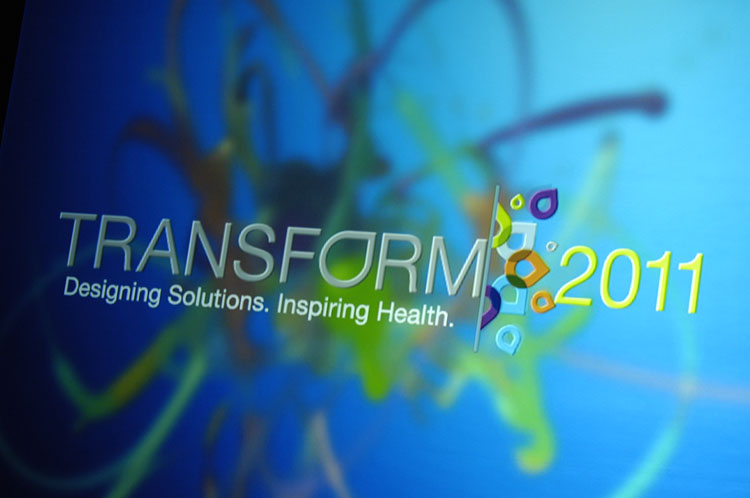 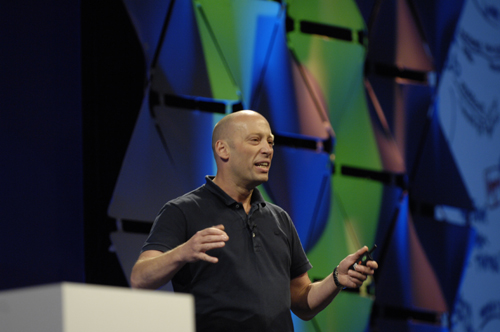 Moderator John Hockenberry started off Monday of Transform 2011, as well as the first session of the day, Designing Solutions, by telling those in attendance to toss out conventional wisdom and all the rulebooks that say how things are supposed to be and, instead, to focus on what could and should be.

Designing Solutions
Hockenberry introduced his collaborator, William Drenttel, director of the Winterhouse Institute and an advisor to the Mayo Clinic Center for Innovation. Drenttel shared the perspective of the designer and asked, “How do we create a culture of creativity to further innovation in health care?”

Each of the speakers shared their unique perspective on design and innovation, but a common theme was apparent: designers are more successful in creating solutions when they involve those they are trying to help. For example, putting the patient at the center of the equation in health care helps designers find better and more appropriate solutions. Here are some highlights from the session:

Roger Martin informed the audience that his planned speech had been revised into a rant about the two words that kill innovation: “Prove it.” Since you can only prove something new through the passage of time, using deductive or inductive reasoning causes people to miss opportunities to discover new ideas or designs. Designers need to embrace abductive reasoning, in order to imagine what might be, rather than what already exists. “Imagining a world that does not now exist and is not provable is the highest form of innovation,” said Martin.

Following Martin, David Webster, from IDEO, shared how his organization is using crowd sourcing to find design solutions. In the past year, OpenIDEO has gathered 17,000 members from more than 170 countries to generate solutions for challenges as diverse as maternal health and affordable education. “It’s about connecting like-minded people from around the world,” said Webster. All these collaborations happen virtually on the OpenIDEO website using social tools.

Webster praised the newest generation of designers for their abundance mentality saying, “They want to make a difference, so they are willing to freely share their ideas because they believe that they have even better ideas still to come.”

The morning session also included Jessica Floeh, one of the three iSpot winners participating in Transform2011. Floeh, a self-described human-centered designer, has been a diabetic since the age of four. She was frustrated with the inconvenience and wearability of her insulin pump and she knew she wasn’t alone in her frustration.

Through research for her master’s thesis, she was inspired to create designs that would disguise the pump as a fashion accessory. Floeh’s company, Hanky Pancreas, now makes a line of products that transform insulin pumps and continuous glucose monitors into fashion statements. You can watch a video about Floeh’s designs below.

Mariana Amatullo from the Art Center College of Design started the session by talking about the center’s Designmatters concentration, “where art and design education meets social change.” Amatullo explained how students are immersing themselves in design projects that have a social impact. For example, a group of students recently completed Es Tiempo, a multi-faceted campaign raising awareness and support for prevention and treatment of cervical cancer.

“Designmatters allows us to look at the world as a classroom with an eye toward changing it for the better,” says Amatullo. “We aspire to redefine and expand the role of the artist and designer into one who is a catalyst for social change and innovation.”

Northwestern University, on the other hand, does not have a formal design program — but students from across disciplines are incorporating design thinking into their studies. For example, at Northwestern’s Segal Design Institute one of the students in the NUvention cross-disciplinary medical innovation program was able to create a smartphone application that helps in the fight again skin cancer by alerting the user he or she has spent too much time in the sun. Meanwhile, the Kellogg School of Management has seen membership in its Design Club spike from approximately 60 to more than 400 MBA students who are interested in learning how to use design as a skill set.

“We don’t have a design school or even a design department — but we design everyday,” says Greg Holderfield, co-director of the Master of Product Design and Development Program. “Our mission is to see the world as it could be through the lens of human-centered design.”

Afternoon Sessions
Transform 2011 brings together “corporate” and “creativity”
For many people, corporate and creativity are two words that often do not mix. Corporate policies and practices are often blamed for squelching creativity. However, speakers at the Corporate Creativity session at the Transform 2011 Symposium proved that creativity not only exists, but is thriving at corporations.

Dondeena Bradley of PepsiCo started off the session, introducing concepts that were prevalent throughout the session - companies must think differently, keep consumers and patients at the center of problem solving and collaborate with others.

Bradley works for a growing division of PepsiCo tasked with creating nutritious food for consumers. For Bradley and other nutritionists in the United States, the concentration is not solely on what's in the food but more importantly, the relationship between people and food. "People really don't see that connection between nutrition and health," said Bradley. "I'm really trying to redefine what nutrition ... means and how it's interpreted so it can change consumer behavior."

Up next was James Hackett, the president and CEO of Steelcase. Hackett shared how often the ability to produce things gets much better over time, but companies often loose their knowledge of the human element and the ability to design useful products decreases. In contrast, Steelcase has thrived by expanding its knowledge of human behavior.

"You can't let yourself stop at the obvious," said Hackett. Steelcase has pushed beyond the obvious to produce products that truly fit people's current work styles as the world in which people work is changed by technology, globalization and other factors.

Closing the session were Beth Comstock and Robert Schwartz of General Electric. The duo described how engineers and designers work together to provide better solutions by considering human elements when design medical devices, which were traditionally void of emotion. For example, by decorating MRI machines and making them part of story, General Electric was able to make the experience less frightening for pediatric patients.

Comstock also shared themes General Electric discovered in its recent innovation survey of 1,000 business executives around the world. No matter where the innovators are from, they agree that innovation requires three things -- collaboration with other organizations, creative people and a purpose. And based on today's presentations, many people at Transform agree.

Rabble Rousers
The final group of speakers on Day 2 of the 2011 Transform Symposium were called the “Rabble Rousers” — people who were creating buzz in their respective fields because of their innovative ideas and practices. The group included a visual arts professor, a physician, two founders of non-profit companies focusing on health care and the creative lead from Mayo’s own Center for Innovation —  and all shared their unique stories.

“Why don’t we do what we need to do in health care?” As a Harvard student, Rebecca Onie worked on a project at Boston Medical Center and saw countless patients suffering from a lack of basic necessities like food and housing. But, as physicians kept telling Onie, “There’s nothing we can do about it.” That inspired her to co-found Health Leads, a system designed to bridge the gap between poverty and poor health and get patients the help they need, whether it’s food, housing, transportation or child care. Doctors simply “prescribe” these critical resources to patients and a group of volunteers at the medical facility helps connect patients with the resources they need.

Health Leads is growing and now has sites in Baltimore, Boston, Chicago, New York, Providence and Washington D.C., reinforcing Onie’s statement that “vision does not change the world; execution does.”

“Everything is a process. Everything is an experience.” Jay Parkinson strives to give patients an experience that inspires health and happiness — and pursuing that mission has taken him down a variety of paths. A preventative medicine specialist, he began his private practice by making house calls in New York. Patients found him via his Web site, checked his Google calendar to book their appointments and paid him through PayPal. After the house call, he’d follow up with patients via instant messaging (IM), video chat or in person. Given the success of his online interaction with patients (he was dubbed “Dr. IM”), he created other online experiences — including Hello Health and The Future Well.

Throughout his career, Parkinson says he was met with criticism for trying new things. “Why are physicians so anti-creative?” he asked. Drawing on his personal experiences, he asserted that young physicians are not rewarded for creativity and they do not seek it out for several cultural and economic reasons. To reverse this trend, he says, we have to admit there’s a problem. We have to teach design and creativity in medical school and create ecosystems of support. We have to gather the innovators and reward innovation. We need to talk about fears, let the young teach the old and accept more leaders. Read more about Parkinson on his Web site.

“Diverse minds feed creativity and innovation.” Halle Tecco’s motto is, “Everyone has a seat at the table.” Her company, Rock Health, specializes in bringing together groups of technologists and medical professionals to create health startups by providing capital, mentorship, operational support and office space. This summer was the beginning of Rock Health’s inaugural term. Tecco received approximately 350 applications for funding. She worked with Mayo Clinic’s Center for Innovation to evaluate the applications based on two criteria: Is this sustainable? Is this scalable? In the end, 11 grants were given out — two of the groups receiving funding were CellScope, and MediBabble, which were featured in a breakout session at Transform on Day 2.

“Designers are the connective tissue.” Allan Chochinov,  professor at the Pratt Institute and the School of Visual Arts in New York City, talked about the role of visual designers in today’s world. Through a collection of photos, he showed how their products all around us — on billboards, at restaurants, even in the bathroom. But, he says, design is changing. “We’re no longer in the business of objects and things; now it’s all about flows and negotiations,” says Chochinov. “We’re going from an artifact business to a consequence business.” He says the question has changed from, “What do you want to make?” to “What do you want to do?”

He says this poses a challenge for today’s designers — what they think they’re supposed to be working on is not always the same as the desired outcome. He says more and more today’s designers have to “stick their fingers into issues that they’re not credentialed for.” But sometimes that produces some unexpected results. Check out one student’s attempt to rethink the toothbrush and give it a more sustainable design.

“Innovation: When done well, it can be transformative.” Lorna Ross, creative lead at Mayo Clinic’s Center for Innovation (CFI), talked about the journey she and the CFI designers have taken over the past few years. To set the stage, she talked about today’s medical world with all of its specialties, sub-specialties and complexities. That’s where CFI comes in. She says the center’s role is to build a system to help connect the dots, identify the problems and find solutions.

She says one CFI’s challenges is to truly innovate at an institution that focuses and depends on research. “More than just research is needed when you seek transformative change,” she says. “We work to balance raw imagination with research.” She says the designers have embraced and acknowledged the culture of Mayo and in turn the groups the designers have worked with have been very willing to try new things. To date, CFI has worked on 76 projects across Mayo Clinic.