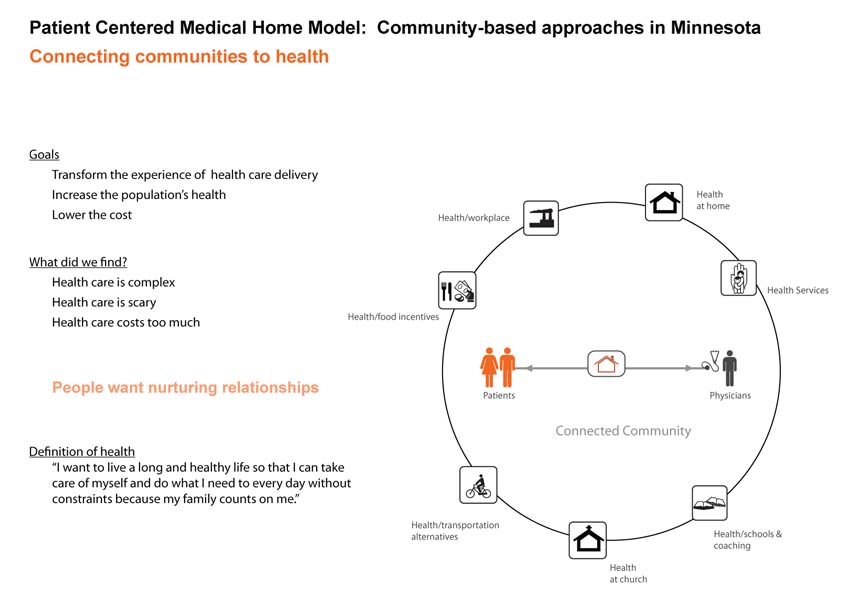 Posted at 00:38h in Insights, Transform by 10 Comments
Share

Patient-centeredness – the idea that every doctor, nurse and care team member filters every decision through thoughtful consideration of a patient’s perspectives and goals -- is a sacrosanct Mayo Clinic value.

But just how widely should a patient’s outlook and needs be defined? If a patient’s family, friends and community services could play a large role in helping that patient maintain or recover good health, should they be taken into account?

Could such things as taking a YMCA exercise class, a trip to the public library or a family counseling center be routinely recommended – or even formally prescribed -- as part of medical treatment?

Adam Rees, the chief administrative officer of the Austin Medical Center, part of the Mayo Health System, raised this tantalizing possibility in a luncheon speech last February 3 at the Rotary Club of Rochester, Minnesota.

The topic of Rees’ speech was a collaborative research project, begun in 2009 in partnership between the Austin Medical Center and the Mayo Clinic Center for Innovation (CFI), the largest health care innovation center in the U.S.

Begun in 2009 and 2010, the continuing project involves a broad spectrum of Austin’s citizens including the Austin Medical Center and local businesses, schools, the faith community, the Mower County Public Health department, United Way and other social services, to develop a “patient-centered medical home” model for Austin that could potentially be replicated around the United States.

The “patient-centered medical home” (PCMH) or “medical home” is a health care model promoted by some health care advocates that stresses forming long-term relationships between primary care physicians, patients and sometimes their families, as well as integration of care across all the potentially health-supporting services available in a community. Those might include elder care programs at churches, temples and mosques, exercise classes at the Y, health education classes in schools, corporate wellness programs, and so on.

A medical home pilot project at the Austin Medical Center was certified last year by the Minnesota Department of Health. The project is designed to test new ways to meet an especially thorny health care challenge: coordinating care for patients with complex chronic conditions. Forty patients and a half-dozen primary care physicians are enrolled in the project, one of 47 state-certified medical home initiatives in Minnesota. Certification allows institutions to bill for Medicaid reimbursements although in Austin’s case, not anywhere near the cost of service.

Austin is a city of 22,000 including 18.5 percent seniors and 9.1 percent Hispanics, a demographic similar to many southeast rural Minnesota communities. Hormel Foods Corp., the manufacturer of Spam and other processed foods, is based in Austin, and employs many Spanish-speaking workers as well as refugees and immigrants from Africa, southeast Asia and other countries.

According to Rees, a CFI team including a cultural anthropologist spent several months in Austin interviewing people of all nationalities, and at all economic levels, to discover what the community felt about the present level of health care in Austin, and how those services might be expanded and improved.

“We were trying to understand health and wellness from the public perspective,” Rees said. “Not the view of a physician or a nurse, but from the people who live and make up the community.”

The project’s initial research period culminated in a daylong Austin community summit meeting held last June 17, attended by leaders from major city government agencies including the Mayor, educational and social service groups, faith leaders, the head of the local YMCA, the United Way, and other groups.

During the daylong meeting, community leaders and participants settled on four major goals to pursue in later stages of the project. The goals, Rees said, were 1) To help Austin area residents achieve a healthy life style; 2) To help reduce anxiety and stress and to increase well-being and ‘mental fitness;’ 3) To build sustainable economic models for wellness using commitment and rewards; and 4) To help Austin area residents connect with existing community services.

“From the cultural anthropologist we found that Austin has lots of good resources, but people don’t always know how to activate them and connect them,” he said.

As an example, Rees said an Austin Medical Center primary care physician might suggest to an elderly female patient, who could benefit from exercise and companionship, that she enroll in a water aerobics class for elders at the YMCA.

But “frequently at the medical center we don’t know what the Y is offering,” Rees said. “So we are trying to step back a little and say, ‘What could we do improve navigation to all these resources, most of them free and paid for?”

Another goal of the CFI’s field research was to determine how Austin residents defined “health” and “wellness.” Survey questionnaires were collected from throughout the community including at the Austin public library, business workplaces, restaurants, churches, grocery stores and community service centers.

A definition of health that emerged as preeminent, according to the surveys, is to be able to “take care of myself and do what I need to every day without constraints because [my friends, family, community, etc.] counts on me.”

“We envisioned a community-based delivery system that promotes health, not health care,” Rees said in his Rotary speech. He added that that phrasing was perhaps “a little bit too radical, but in essence true. That’s really what it’s about. How do we promote health? No one wants to be in a hospital.”

The community-wide medical home project in Austin continues vigorously into 2011, Rees said.  Four teams, which at the earlier summit meeting were assigned to suggest steps to achieve the four main community health goals, will reconvene later this month, he said. After that, a second summit will be held at which time the four teams will present those steps to the community.

Once the recommendations are made at second summit, Rees said, “our intent is to immediately begin supporting those and rolling those out.”